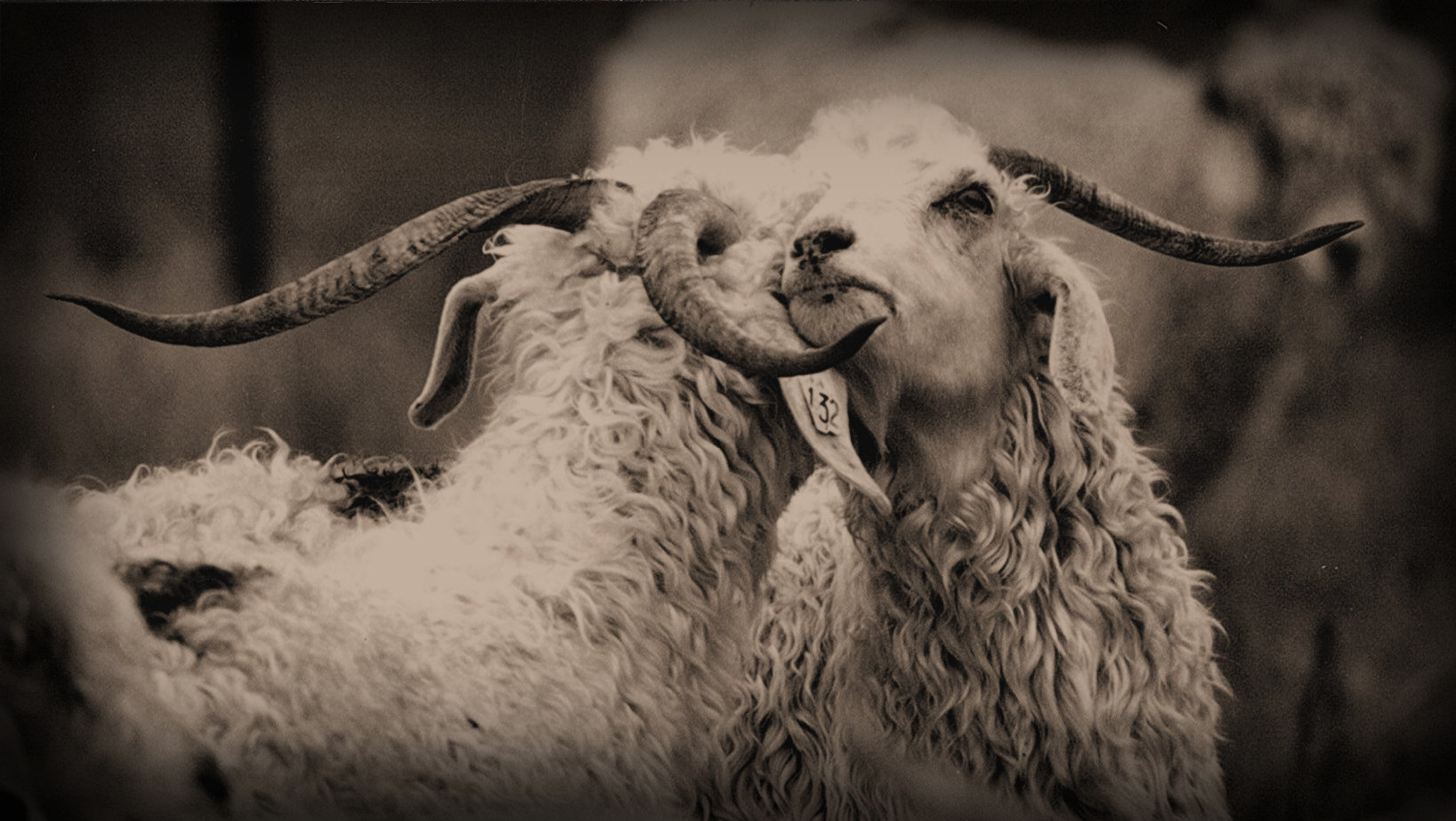 The first pair of brothers found in Scripture are Cain and Abel (perhaps more correctly Qayin and Hevel). Their story has many lessons for us, but as we consider the time of Yom Kippur, the brothers connection to the two goats of this appointed time are of particular interest.

The two male goats of Yom Kippur were an unusual offering. In some respects, they were considered to be a single sin offering (Lev 16:5), yet obviously made up of two entities with very different destinies – one to be slaughtered, and one to be banished.

Although not found in Torah, the Jewish Mishnah (in Yoma 6) states that these two goats were supposed to be purchased at the same time, to be of the same appearance, the same height, and the same value. Some have suggested that the goats would have often been twin brothers – just as suggestions have been made that Cain and Abel were actually twins (once again, not clear in Scripture, but definitely a possibility).

So, the parallels between the two brothers (in Genesis 4:1-16) and the two goats (in Leviticus 16:5-22) obviously begin with the number of related males involved. There’s not much to learn from this, but it hints at the possibility of further parallels that may be worthy of our attention. So, let’s look at the roles of the two goats and see how this may all fit together.

On the holy, set apart day of Yom Kippur, the two goats were brought before YHWH’s high priest, who would cast lots upon them. One lot was for YHWH, while the other lot was for the scapegoat. The first goat would be slaughtered as a sin offering for the Israelite people. The blood of this slaughtered goat was taken by the high priest into the most holy place of the tabernacle and sprinkled onto the mercy seat of the ark and before the mercy seat seven times with the finger. This act was to make atonement for the tabernacle because of the uncleanness of the Israelite people. The blood would also be put upon the horns of the altar and sprinkled upon the altar seven times, and this was to cleanse the altar from the Israelites’ uncleanness.

Clearly the first goat was selected to die, but this was in order to bring atonement and cleansing from sin through the shed blood. When we look at Abel, we see a young man killed in his innocence. It was never Abel’s decision to become the first murder victim in history, but the lot fell on him in YHWH’s perfect plan. Abel was not without sin, but he was living a life of obedience which was respected by YHWH. So, Abel’s death is definitely a link to the first goat, but I think it’s the mention of blood that is of greater significance.

It is YHWH Himself that says to Cain, “the voice of your brother’s blood cries unto me from the ground“. This is certainly an intriguing comment. It implies that the snuffed out life of Abel is, in effect, crying out for justice. Why would the righteous man die, rather than the rebellious one? Was there possibly a deeper reason for this than Scripture directly states? An interesting rabbinical comment found in Leviticus Rabbah 20:12 says, “just as Yom Kippur atoned, so does the death of the righteous“. When we consider this comment in light of the work of Yeshua, I’m sure we would have to agree. Was Abel’s death also, partly, an atonement of sorts? Perhaps.

Let’s consider the second goat. This is the goat that had the sin placed upon it, and is commonly known as the scapegoat. The Hebrew word used here is actually “azazel” – a word which is only found four times in Scripture, all in Leviticus 16, and all describing the second goat. Many link this word to the name of an angelic being mentioned in the book of Enoch, who came down to earth, causing much sin and destruction. According to Enoch, Azazel was later bound up and cast into an abyss in the desert wilderness awaiting his ultimate fate of being cast into the fire. Others consider “azazel” to come from words meaning “goat that departs” or “to banish”. I think it is difficult to conclusively know the meaning of the word here in Leviticus, but both these meanings are probably helpful in our understanding.

It must be understood that Scripture tells us that the second lot was “for azazel”, and that the goat was also to make atonement. This cannot mean, though, that atonement was made with an evil angelic being! It is certainly true that cultures around the world have sought to make atonement with evil gods, spirits and demons through sacrifices (both human and animal). However, it should be blatantly obvious to us that there is no way YHWH would condone that for His people. Atonement was being made with Him alone.

I think these thoughts on azazel, the scapegoat, can at least lead us to realise that this goat was to somehow make atonement with YHWH without shedding its blood. Instead, the goat would be banished from the presence of all Israel by departing into the wilderness. Jewish tradition states that the goat was thrown from a cliff to its death in order to prevent it from ever returning, but the Torah doesn’t specifically say this. Therefore, I don’t believe that the death of this goat was required for atonement. We can logically conclude that the goat eventually did die in the wilderness, though, and this may be worth consideration. It wasn’t the death that atoned, necessarily, but the banishment was so absolute that there was no way of returning from it.

In the same order of these goats at Yom Kippur, we read in Genesis of Abel’s death, followed by Cain’s banishment into a life of being a fugitive and wanderer. This is Cain’s lot – specifically given to him by YHWH after he is cursed. Amazingly, although Cain complains about his punishment, he shows no remorse at what he’s done or any hint of a repentant attitude. So, how can this be any form of atonement?

It is my understanding that the purpose of the scapegoat is to remove sin to a distant place of no return (Lev 16:22). I honestly wonder if this is the atonement required for any sin that is unable to be atoned for through the shed blood of the sacrificial goat. What sin could this possibly be? I would propose that it is unrepented sin. Cain is a clear example of this. He was given a chance to repent and turn from his angry, sinful attitude, but he chose not to. As a direct result, he was cursed and sent out from the presence of YHWH (Gen 4:16). He was banished as a fugitive into a wilderness of spiritual emptiness.

Remember, YHWH and sin don’t mix! Yet, He can’t just turn a blind eye to it and pretend it isn’t there. If that were the case, the sinless eternity we can look forward to is just some sort of a sick joke. But – it’s not! I believe the unrepented sin must also be atoned for in some way. It simply has to be covered over and removed. Ultimately, there will be a new heaven and a new earth without sin.

Therefore, I believe atonement is made by YHWH in two ways. The first goat shows how sin can be atoned for through the shed blood of the innocent, but the second goat shows that sin is also atoned by a full removal from the presence of YHWH and of Israel. Sin can’t remain in the Israelite camp to pollute the tabernacle, so it has to be dealt with. Looking to the future, we must remember that all people will be judged one day, and we will find out who’s sin has been atoned for by the sacrifice of our sinless Messiah, and then others that must be eternally removed from His presence. That day (possible Yom Kippur) will surely be a sombre day.

So, Cain is a type, or depiction, of the person who chooses to hold onto their sin. The atonement associated with that person doesn’t actually help the individual at all – they are not even seeking atonement. However, atonement is still made from YHWH’s perspective. Sin is removed from His presence. We read of the “way of Cain” in Jude 11, and this is living in a selfish, defiant, unrepentant fashion. That person will not have a good end!

As we consider the links between the two goats of Yom Kippur and Cain and Abel, I think we may gain another important perspective when we consider two other people – Adam and Eve (Chawah). The story we read in Genesis never mentions the parents, but don’t think for a minute that it didn’t impact their lives. In fact, I’m sure the lives of Adam and Eve would have been turned upside down after the murder of Abel, and the banishment of Cain! As we contemplate their reactions, perhaps we will have a greater personal understanding of the seriousness and importance of Yom Kippur.

Imagine the shock and devastation that Adam and Eve would have felt when they heard the horrendous news of Abel’s murder at the hands of his brother. Along with other emotions, they surely would have felt that grip of guilt all over again, knowing that their original sin was directly linked to these terrible events. In addition, human death was unknown to them, so the loss would have been so much more painful. But they lost two sons that day, not just one! It was as though the two goats of Yom Kippur played out right there, East of Eden. One dead, one sent out, never to return.

As I’ve said, Adam and Eve knew that sin had entered humanity through their actions in the Garden, and if the gravity of that decision hadn’t been fully realised, then here was another opportunity to grasp it. The blood of righteous Abel may have been crying out to YHWH for justice, but may have equally been crying out to his parents as a painful memorial of their sin. If we put ourselves into their position, I think we could clearly understand that Abel had taken their punishment. They deserved death, yet, in effect, it was their son that died in their place. Yom Kippur should cause us to consider these same things.

It’s possible that Adam and Eve never saw Cain straight after the murder and, if this story is truly a type of the two goats, then perhaps they never saw him ever again. It appears that the young man choosing to hold onto his sin without any repentance has nothing further to do with the Godly line and loses all contact with his parents. What a devastating situation!

The banishment of Cain would have served as a memorial for Adam and Eve’s own banishment from the Garden of Eden. The Garden was, in effect, the first temple or tabernacle where the Creator communed with his creation. Sin destroyed that pure place, and Adam and Eve were banished from it forever! They could never return from the comparative wilderness in which they now lived. Yom Kippur should cause us to consider these same things.

Yom Kippur is an important reminder of the far reaching effects of sin. Sin is so much more destructive than we generally care to believe. There are only two ways to deal with the sin issue in mankind, and every individual will fall into one of the categories. The death of the Righteous One can atone and bring restoration, or alternatively, the person can choose to hold onto their sin and face eternal banishment from YHWH’s presence. Adam and Eve saw both and in the two goats of Yom Kippur, the Israelites were reminded of both each year.