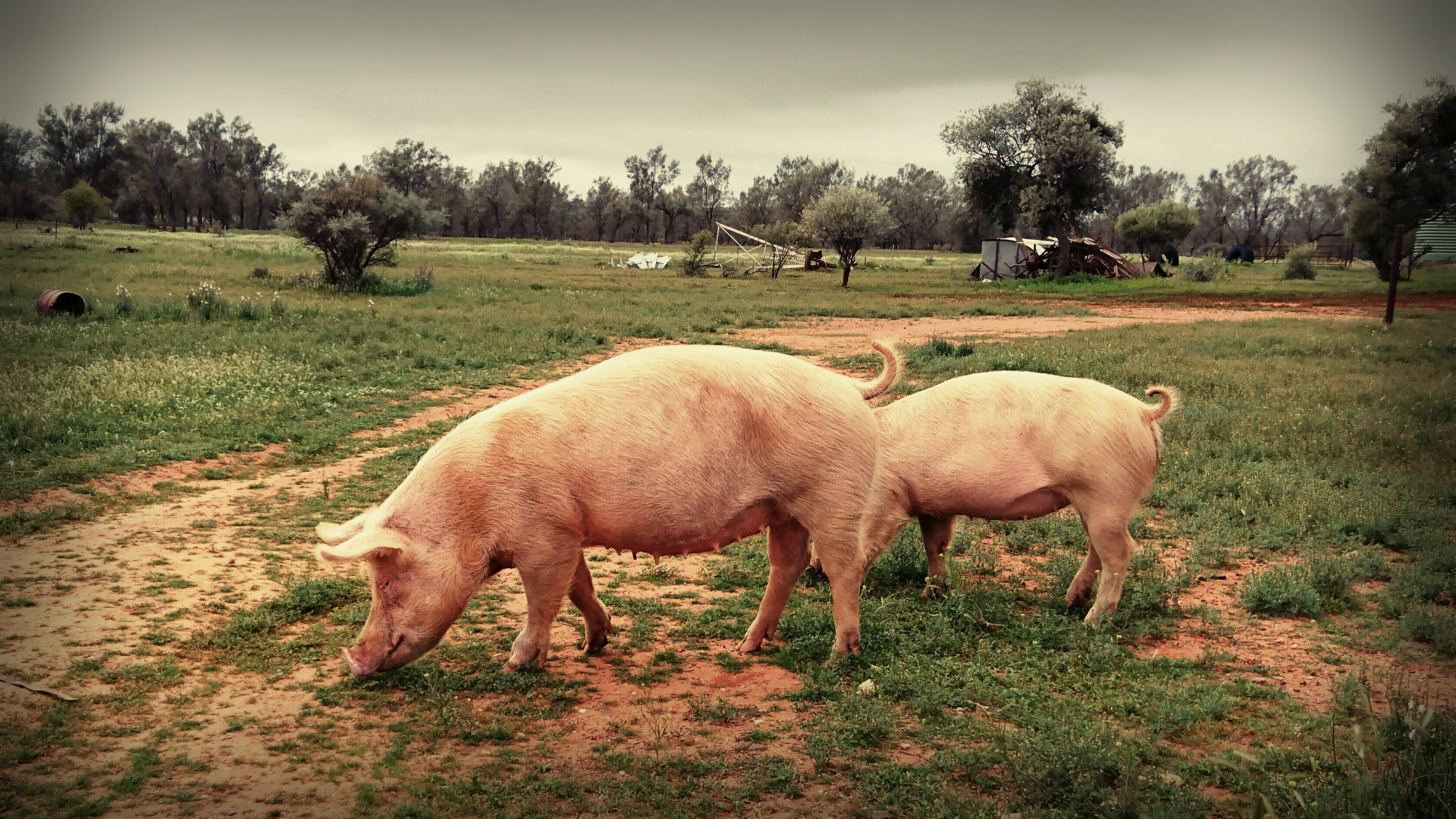 In the book of the Acts of the Apostles, we read of an important vision that Peter was given. It’s a vision that has been used in christianity to teach that the unclean animals listed in the supposed superseded “Old Testament” are finally permitted to come onto the menu. However, as we examine this passage a little closer, we are going to see that this understanding actually has no legitimate basis.

The story of Peter’s vision, and his subsequent interaction with a Centurion named Cornelius, is found in Acts chapter 10. I encourage you to read through the chapter if you’re not familiar with it, as I won’t include much of the text here. Our concentration will be on the lessons of the vision itself, which is found in verses 10-17.

Let me begin by briefly stating the general christian view of this vision. In essence, we’ve been told that Peter sees something like a huge sheet that holds many different types of animals. A voice tells him to kill and eat, and after his shock and protest at eating the animals he sees (that clearly include unclean ones), he’s told not to call any of these animals unclean. God has now made them clean! Ok – so that’s the predominant christian teaching in a nutshell. Let’s now have a closer look and see if that’s what the text actually tells us.

It certainly does seem quite clear that the “sheet” contained both clean and unclean animals when we look at Peter’s words (v14). At this stage, we see Peter’s shock and bewilderment at being told to kill and eat the animals he sees there. He actually says he won’t do this – and that he has never eaten anything that is common or unclean in his entire life. At this point, it’s worth reminding ourselves why Peter was so shocked by this message. He knew YHWH doesn’t change and also knew that His Torah tells us in no uncertain terms that “you shall not eat any abominable thing” or any flesh of the unclean animals (Deut 14:3-20 & Lev 11). No wonder Peter was bewildered by the command to kill and eat – these Torah commands were simple to understand and were fully supported by the many prophets that came after Moses. In fact, we see that Peter never actually came to the conclusion that the vision meant that he could eat unclean animals. He was still thinking through the possible meaning when the Spirit began to speak to him (v19).

We need to look a little closer at Peter’s words if we’re going to understand this vision. In v14, Peter says that he has never eaten anything “common” or “unclean”. Then, in the next verse, the voice tells him not to call anything “common” that has been cleansed. Notice the two words, and the distinction here? There is nothing in this passage that indicates that anything classified as Scripturally “unclean” is now considered clean! There is an important lesson that is being taught however, and that lesson is: what Peter calls “common” has been cleansed by YHWH and that he is wrong to say it cannot be eaten!

It is this “common” term that Peter uses that we need to understand. It’s the Greek word koinos/koine that is used here. The word is used ten times in the NT [Apostolic Scriptures], and has the implied meaning of “shared” or, indeed, “common” (Acts 2:44, 4:32 & Jude 3). In fact, this Greek word is used just four times in the LXX (Greek translation of the OT), with the meaning of “shared in common”. It’s important to also note that the word is used in Mark 7:2 and refers to more of a ceremonial (or man-ordained/traditional) uncleanness, as the Pharisees accused Yeshua’s disciples of having defiled hands. I definitely believe that Peter’s use of the word reflects on both of these themes.

Before going any further, let’s briefly look at the Greek word for “unclean”. It is akathartos and is used, along with its derivatives, about 200 times in the LXX (Greek translation of the OT). It is the word used for every type of unclean animal and for every type of unclean thing or situation. The many NT Gospel uses of the word are associated with unclean spirits in every instance. It is quite clear that this word has a different meaning to the word for “common”, so we can easily conclude that Peter was not using the two words as synonyms.

Reading through the gospels and later writings of the NT, we see quite clearly that the religious leaders of the day followed traditions that held as much weight in their eyes as the Torah and the Prophets. Yeshua made the point on several occasions to deliberately break these traditions, while still upholding His Father’s Torah. What we often fail to realise, is that the rest of the population also held to these beliefs in ignorance of the fact that they could actually oppose YHWH’s instructions. Yeshua’s disciples were no different. In fact, on more than one occasion, they were amazed at Yeshua’s teaching against the doctrines of the Pharisees and Sadducees. Peter, himself, had to learn another lesson right here with the vision of Acts 10.

It seems that the teaching of the day was that a clean animal, which was suitable for sacrifice, could become “common” or defiled if it came into contact with an unclean animal. For example, a sheep that was set apart for a temple sacrifice would be defiled if it was put into the same pen as a camel. Likewise, the same sheep was not allowed to be eaten now that it had become “common”. Peter states in Acts 10 that he had never eaten such an animal. He was talking about an animal that had been created and declared by YHWH to be clean and edible, yet he considered it to now be “common” and equal to an unclean one.

In some respects, I can understand why an animal could have been considered as defiled in the manner in which I’ve discussed. However, this belief truly appears to be adding to Torah (against the command of Deut 4:2), and so must be rejected. The fact remains, though, that Peter had grown up accepting this doctrine. Don’t we also grow up with doctrines and beliefs that have actually added to, or taken away from, YHWH’s word? It should be our desire to change any belief we hold if the Spirit shows us that we are actually in error.

We can understand Peter’s bewilderment much better now that we understand the doctrine that he was living by. The animals he sees in the vision are held by a sheet, and totally mixed and coming into full contact with one another (meaning they were “sharing in common” the enclosed and cramped space). Nothing he sees in there could possibly be clean according to his belief. The voice then tells Peter, “what God has cleansed, call not common” (v15). Notice here once again that Peter is not being told that God has cleansed anything unclean. This is important to realise – Peter says he’s eaten nothing “common” or “unclean”, but the voice only tells him not to call anything “common”. We see clearly that this symbolic vision gives no indication whatsoever that an unclean animal somehow became clean.

Although we can learn some reasonable lessons here concerning what animals YHWH allows us to use as food, we cannot ignore the reason this vision was actually given to Peter. You see, not only did the religious leaders hold to the belief that clean animals could become “common” (in effect, they became unclean), but they also believed that a Jew couldn’t mix with a non-Jew for the very same reason. Once again, Peter also believed this, and we see very clearly that this is the issue that’s ultimately being taught. Peter admits this to Cornelius (v28), and explains that YHWH has shown him that he should not call any man common or unclean. After this event took place, Peter returned to Jerusalem and was accused by the Jewish apostles and brothers that he had gone “to men uncircumcised, and did eat with them” (Acts 11:3). This was clearly wrong in their eyes, but Peter explains to the men the vision God gave him and the resulting meaning of the vision in being summoned to the house of Cornelius in Caesarea. “When [the men] heard these things, they held their peace, and glorified God, saying, then has God granted repentance unto life to the Gentiles” (Acts 11:18).

The point is that YHWH has made humans as humans! So often, we differentiate between gender, skin colour, racial origin, age, etc, etc. YHWH looks at the heart! Whoever He has created as a fellow human being, we are not to call “common” or “unclean”. For any non-Jews like me, we can be so thankful that Peter was given this world-changing vision! As a result, an Italian Centurion, along with his family and friends, had their lives forever changed by YHWH – and that same Gospel message began to spread throughout the world.

So, when we examine this story in its context, there really is no way we can conclude that the animals created and described in Torah as unclean have somehow become clean and suitable for food. Peter never reached that conclusion, and neither should we. Our God simply does not change his instructions, but … He is in the business of changing people’s lives and bringing them into His Kingdom.