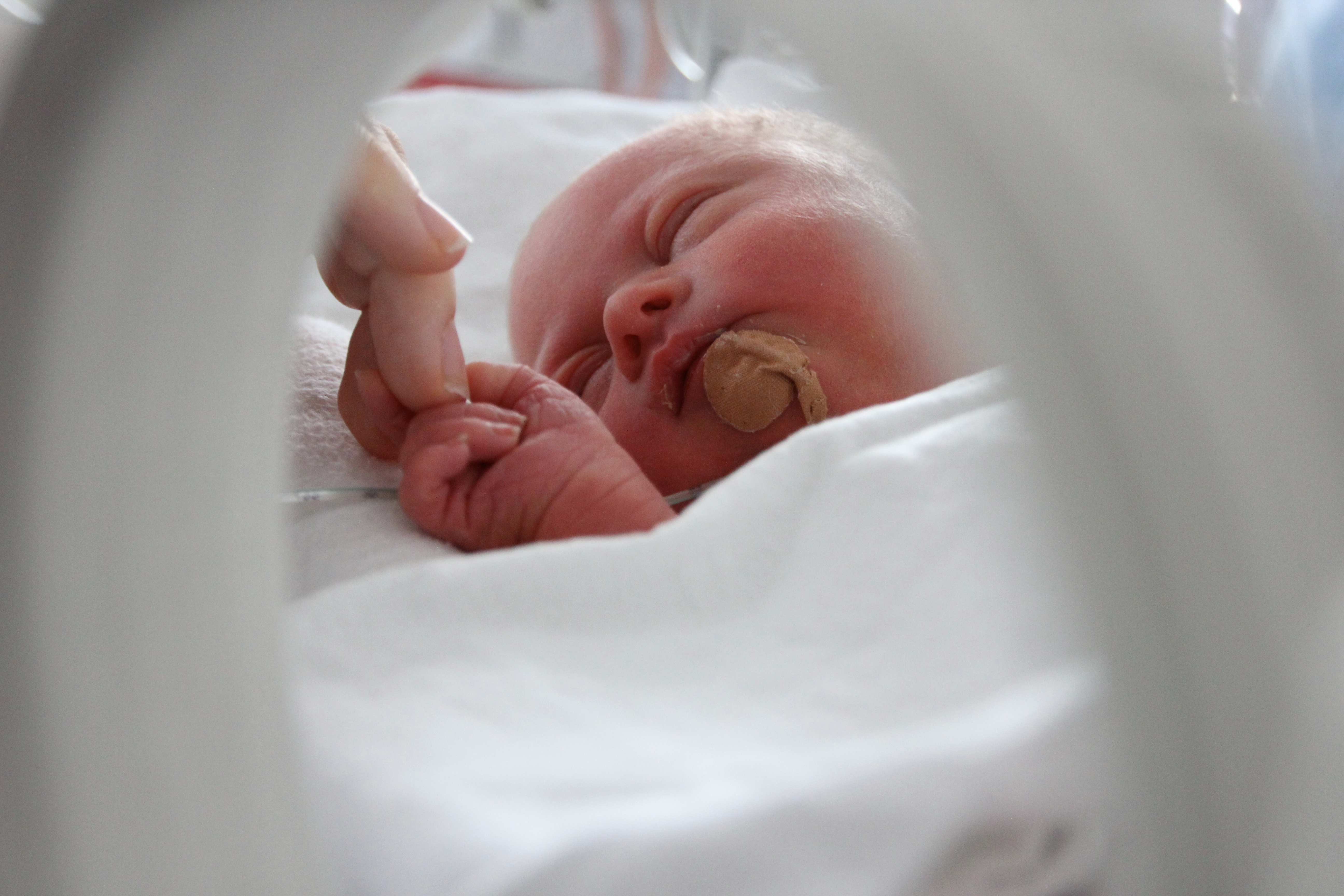 Jotham was born in February, 2014, and is our youngest child. The long lead up to his birth, and the days that followed, have probably been the most difficult of our married life. There is no denying that Jotham has changed many things in our family life and, in the process, we have been changed too.

Scans early in the pregnancy showed that there were some abnormalities in the uterus. My wife was soon diagnosed with having both placenta previa and placenta accreta, meaning the placenta was positioned very low, at the cervix, and had also partly grown through the uterus wall, later attaching to the bladder. One of these conditions alone is considered bad and both of them, downright dangerous to the life of mother and baby. This discovery meant a trip to Melbourne, our capital city – almost three hours from home.

It was a very emotional visit to the doctor, who said that my wife should not return home until after the birth. She was only 21 weeks into her pregnancy and there were seven other children to care for at home!

Needless to say, our lives were turned upside down in many respects. We lived apart for three full months, aside from a weekly visit. The children only saw their mother twice in that time. We learnt to trust our God more than we ever had. It certainly gave us peace, but was never easy. I had no clear assurance that my wife would survive this ordeal, but never denied YHWH’s power to do whatever He willed in our lives. In the end, He would decide whether she, and our baby, would live or die – and I was willing to accept whatever He had planned. This is not to say I simply let fate take its course. No – I pleaded constantly for my wife’s physical salvation and for the protection of our small child. Paradoxically, I was willing for YHWH to have His way and at total peace – yet also under heavy stress and uncertainty for what the future would bring.

Soon after my wife began her hospital stay, the rest of the family read through Psalm 31 together one day. It was a Psalm that impacted me and remained important to me during that time. Psalm 31:1 says, “In you, O YHWH, do I put my trust; let me never be ashamed: deliver me in thy righteousness.” Here is a journal entry I wrote about a week after reading the psalm:

“I pray, as David did, that I will never be ashamed of my trust in YHWH! If, during this whole ordeal, I lose my wife, won’t that bring shame upon me for trusting in GOD? Won’t there be people thinking and saying that I should have not allowed this situation to happen in the first place (by using some form of birth control)? But, I pray that I will not ever be ashamed of my trust in the GOD I serve! May you, my Father, protect my wife and deliver her in thy righteousness. May glory go to you through your mercy and grace that you show us, and may we be your witnesses and servants as we look to you. Our trust rests in your goodness and faithfulness – may we never be ashamed.”

Let me give glory to YHWH here, because we witnessed His answer to this prayer! There was nothing mighty or special or powerful about the man who prayed this prayer, let me assure you. YHWH is the One who takes all credit and, amazingly, He chose to use our family to show His mercy and grace.

One morning, as I was preparing to leave home for my weekly trip to the hospital, I received the call that my wife had started to bleed. This was a bad sign, and I left as soon as I could, arriving at the hospital in time to see my wife before she went into the theatre for surgery. Excessive bleeding was one of the biggest dangers, and as I said my goodbyes and sat in the waiting room, I could not hold back the tears for some time. Once again, I fully trusted in my God to do good, yet the uncertainty of what He had planned was still at the forefront of my mind. Despite this battle within me, His peace flooded through me and fully sustained me during that long wait.

After some time, I was called to meet my new son as he was wheeled down to the special Neonatal Intensive Care Unit, while his mother continued in surgery. YHWH had saved this small boy, and he was relatively healthy at just 33 weeks gestational age.

After returning to another waiting room, I was finally called to see my wife. She was alive! I was so relieved and so thankful. However, she had gone through a lot that day. She had ended up bleeding badly during the procedure and an emergency hysterectomy had to be performed after the birth. It was a long operation and she had four units of blood transfusions, plus extra blood of her own saved and returned to her body through a special blood cleaning machine.

My wife was not allowed to leave her room and see Jotham, our new son, for two days after the operation. She was on strong drugs to control the pain, but desperately wanted to see her son. Finally, we were permitted to go downstairs and see him. She had gone through a lot for this child and it was great to see her with him. As we started to ask some questions about how he was going, we were told by the doctor to go back to the room and wait. Little did we know that the next big event was about to take place.

We knew before Jotham’s birth that he had club feet, so we expected a discussion about this condition. However, the doctor informed us, in a rather abrupt manner, that Jotham had Trisome 21 – more commonly known as Down Syndrome. After all we had been through in the preceding few days, this made us both feel like we’d just hit a brick wall. There was very little positive in that meeting and the cold, uncaring impression we had remains our overriding memory.

There was, however, one thing during the conversation that went against the general flow. The doctor asked me what the meaning of Jotham’s name was, and I told her that it meant “YHWH is perfect”. She replied by saying, “and Jotham is perfect”. To me, this is the only thing I recollect as being positive at that time. It’s as though YHWH Himself was trying to remind us of something. It’s not that Jotham was perfect – we had just heard that there was plenty not perfect – but that YHWH was perfect! To this day, He is perfect, and none of these events were outside of His plan.

We had some huge emotional struggles during the early days in particular, but I don’t think we ever questioned why our GOD had brought these events into our lives. However, I know there were some others who did. It seemed that they viewed these less-than-perfect things as being a possible result of our lack of faith or perhaps a punishment of sin. I don’t for one second think our faith was perfect or that our lives were sin-free! However, to this day, I also do not believe that everything surrounding the birth of Jotham was a result of his parent’s failures.

A couple years after these events a verse spoke to me, reassuring me that YHWH’s plans are never hindered. Moses had nervously offered an excuse for not wanting to face Pharoah, saying that he was not able to speak properly. YHWH responded by asking him, “Who has made man’s mouth? Or who makes the dumb, or deaf, or the seeing, or the blind? Have not I – YHWH?” (Ex 4:11). Who made Jotham? And who brought about all the circumstances leading up to his birth? YHWH did! He is perfect, remember!

YHWH has plans for His people. Sometimes they don’t match our plans very well. Are we willing to bring glory to His name through our submission and obedience? If we are truly His children, then I think there is simply no other way!

Today, many, many children with Down Syndrome never get to see the light of day. Over 90% are killed before birth! Killed!! And our society has the gall to say that YHWH is an unloving God!?! Well – He happened to choose our family to save one such child. Once again, that doesn’t make us super-good people – it simply shows His mercy for Jotham and, in the time that has followed, continues to change our lives to fit in better with His plans.

Now, eight years later, Jotham doesn’t walk, stand, eat, drink or talk. He continues to need some medical procedures. But YHWH is still perfect! He has endured a lengthy time of regular seizures and numerous stays in hospital, but YHWH has healed him. There’s no denying that Jotham is very different to those around him, but we are thankful for him and for the lessons he has taught us.

We are fully aware that our future as parents and carers for Jotham will continue to bring some difficult times. It can be a struggle to accept this when the selfish plans you have need to be pushed aside. And, let me tell you, this is not just a one time decision. There is a constant choice that needs to be made to accept YHWH’s plans over my own. But, isn’t that what our lives should always look like?

Jotham is alive – and he’s our God-given son …. YHWH is perfect!

This has been written mainly from my perspective. There were plenty of other emotions in the lives of my wife, our children and other friends and family. However, it is through these personal perspectives that YHWH worked in my life.

Much credit must go to my wonderful wife also. She has been such a caring mother! She sometimes feels that she does nothing for her GOD but, watching her with Jotham, it is evident that He uses her daily!

One thought on “Jotham”